Missionaries to a kingdom bordered by South Africa and Mozambique are pleading for prayer on behalf of Eswatini, formerly known as Swaziland, where death, violence, looting and martial law have forced nearly all missionaries to evacuate the country. Nonessential employees of the U.S. Embassy there have also fled.

"Of course the big thing is access to food and gas," said Becky Spencer, who canceled a planned six-week summer mission trip to Eswatini due to upheaval in the nation. There, she and her husband, Tracy, established a Christian preschool (Little Lambs), care home (Shepherd's Care) and church.

The Spencers' nonprofit, Grand Staff Ministries, also offers a sponsorship program that provides 22 children with school fees, uniforms, backpacks and school supplies. Most of those children and their families also depend on the ministry for food and blankets, as do several families from the church.

The Shepherd's Care staff risked their lives to pick up one their residents—a deaf boy at a school in South Africa that closed before all the others in Eswatini—because it's beside one of the king's residences, where burning was expected. Their ministry partner who, with his wife, cares for the sponsored children who don't live at the care home, helped a friend rescue his son from another institution during the violence on the streets.

"All of our Shepherd's Care children and staff are still safe, and so far all our other sponsored children we've been able to reach are well," Spencer said. "Even though the small shop beside the elementary school in our village was destroyed, violence has not reached the care home. We're grateful for angelic hosts surrounding our GSM family and property." 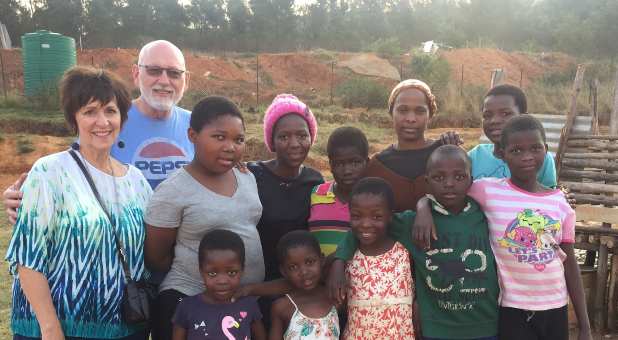 Beyond concerns about safety, food and fuel supplies from South Africa, where there is similar unrest, prayer for boldness among pastors to share the gospel with people who are worried and concerned, thinking about eternity and experiencing loss is paramount, Spencer said.

Prayer for relief from anxiety among people who are afraid and concerned, wondering what they are going to do next, is also needed: "The peace that passes understanding, and that God will come through miraculously over and over and over," Spencer said.

Prayer is needed, too, for Eswatini's economy, hit by COVID-19 and now the destruction of businesses. When the Spencers left the country in April, there was one case of coronavirus; now there are hundreds of reported infections.

"Please pray for grace and wisdom for our Swazi staff as they have so many people relying on them for help," Spencer said. "Pray that food supplies can get through and stores can stay open—and reopen. Pray for miracles of provision. Pray for revival as people cry out to God."

Stan Drew, former longtime missionary in Eswatini, told Spencer the ministry should have a four- to five-month food supply because of unrest in South Africa, the source for most of the tiny kingdom's commodities.

"We're trying to find enough food to stock up to give [the children]," Spencer said. "When I say food, I'm talking about nonperishables like mealy-meal [the most relied-on ground corn product in Eswatini], and rice and beans. We're just trying to find enough of those staples so we can take care of everybody."

Internet access is sporadic, but Spencer knows most missionaries have been evacuated. Daily, she checks news reports from Eswatini, hoping to learn of restoration of calm in the beloved kingdom.

The U.N. has expressed deep concern over the reaction of authorities to the protests and looting, calling for an independent investigation into allegations of "disproportionate and unnecessary use of force, harassment and intimidation" by security forces, per The Guardian.

The protests, largely among young people, began in May when a law student was murdered under circumstances that suggested police involvement. The unrest increased dramatically last month when authorities said they would refuse further petitions to King Mswati, who has ruled there in an absolute monarchy for 35 years. This decision led to an escalation in violence and breakdown of the nation's general law and order.

Forty or more people have died in six weeks, with over 150 hospitalized from injuries due to gunshots or beatings by police, per NPR.org.

And according to the World Bank, two-thirds of the kingdom's 1.2 million people live below the poverty line.

But the looting, violence and death in Eswatini have outside influences, Spencer believes. "By some reports, communists and socialists in South Africa have stirred up youth in Eswatini, taking advantage of their discontent," she said.

Swazis also feel legitimately wronged by Mswati, she said. But Spencer doesn't believe the peace-loving people she knows would have resorted to violence on their own.

"I know there is a lot of frustration and desire to have answers," Spencer said. "It did not take very much for the flame to get lit. When you don't have food, socialism starts sounding good to people who really don't understand what it will do long term."

"I'm just praying that there will be a peaceful resolution, which will probably require negotiations from the outside—maybe the U.N or the U.S.," she said.

Please join the staff of Charisma News in praying for the people of Eswatini and for all those affected by the violence and loss.

Find more information about the Spencers' ministry at grandstaffministries.com.

Steve Rees is a former general assignment reporter who, with one other journalist, first wrote about the national men's movement Promise Keepers from his home in Colorado. Rees and Promise Keepers Founder Bill McCartney attended the Boulder Vineyard. Today Rees writes in his free time.