Rabbi Shmuel Bloom of Union of Israel Organization of America is a busy man involved in important matters concerning the public.

Why do you think he would spend many hours traveling to look at bananas in Israel all the way up north near Tiberias?

A non observant secular banana farmer decided that he would observe Shmitta (the Biblical Sabbatical Year) this time around. He approached the organization that helps facilitate this for assistance and they stipulated that he would be registered in their program if he would also observe the Sabbath throughout Shmitta. He agreed. A Rabbinic court in Bnei Brak near Tel Aviv undertook to cover his farming expenses in return for which all the produce would becomes the property of Rabbinic court and would be distributed in full accordance with the Biblical Laws of agriculture.

Israel has suffered a significant cold spell over that winter for 2 to 3 weeks. Bananas don't like cold and cold doesn't like bananas. Needless to say, they don't get along. When bananas are still growing and get hit with frost, they turn brown and become rock-solid hard. The banana farmer, knew he was in deep trouble when the relentless cold hadn't let up for over a week. He lived a distance from his orchard and hadn't yet seen the damage with his own eyes. He began to receive calls from his neighbor farmers, who have orchards bordering his, complaining bitterly that their entire banana crop had been destroyed by the frost.

He decided it was time to inspect the damage up close, no matter how painful it may be. He drove up close to Tiberius to inspect his orchard, as well as those of his neighboring farmers. As he passed from one orchard to another, he was overwhelmed by the damage. Not a single fruit had survived, no tree was spared. His neighbors took quite a beating. All the bananas were brown, hard as a rock. He could only imagine how bad his trees must have gotten it.

Yet when he finally got to his orchard, he was awestruck! ALL of his bananas  were yellow and green. It's as if his orchard was not

part of this parcel of land. His orchard bordered those of his neighbors, but not a single tree of his was struck by the frost. It's as if a protective wall kept the damage away. At first he thought he was imagining it, and as he rushed from one section of his orchard to another, the realization that more than the farmer keeps the Shmitta, the Shmitta keeps the farmer hit home. He immediately called his contacts who facilitated his observance of Shmitta and yelled into the phone, "A miracle happened, a miracle happened!!"

There is no way to explain this other than that G-d keeps His promises. He says observe Shmitta, and I'll take care of you. He sure does!!! "I will ordain My blessing for you" (Leviticus 25:20) 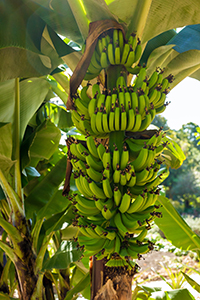 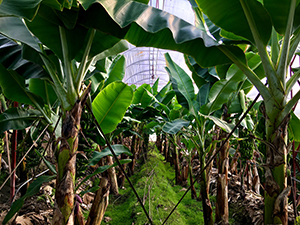