Over the next two years, my wife, Tiana, and I worked tirelessly on creating the Conquer Series - a cinematic small group study that we hoped would help men find freedom from pornography.

>>LEARN MORE ABOUT THE CONQUER SERIES

Today, the Conquer Series is helping more than one million men in over 80 countries find freedom from pornography.

I recently met one of these men, Bryan, at a conference for Conquer Series Leaders. Less than two years ago his story was bleak. His struggle with pornography was about to end his marriage. Bryan explains,

"I tell people that when I was in my addiction, it was like I was drowning in a pool surrounded by my friends and no one even knew. I was helpless and hopeless."

"But God, in His mercy, let everything come to the surface so we could see how He could work a series of miracles."

Bryan told me the transformation that they had seen in their marriage,

Bryan handed me this card his wife, Celia, had given him as he left for the conference. I took a photo of it while standing in the lobby. 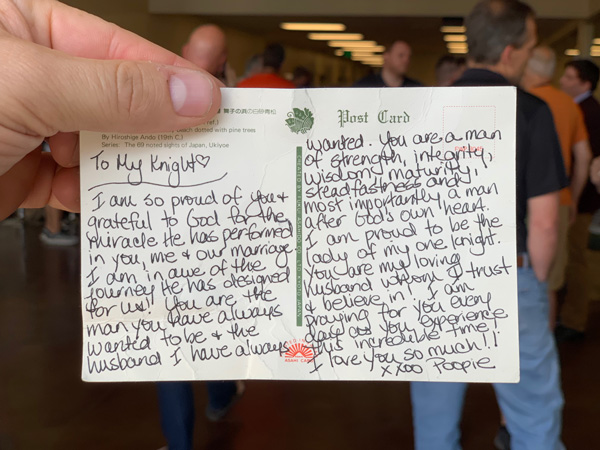 Bryan's testimony is why my team and I come to work every day. We want to see that transformation throughout the Church! The exciting thing is, that once these men find

freedom, they don't stop there. Bryan now leads 15+ men through the Conquer Series every Thursday evening.

He explains, "Some of these guys are fresh out of prison, some are in different levels of leadership, and both groups are really authentic and transparent. It is amazing!"

If you're currently in the fight for your relationship, know that God wants to do something amazing in your marriage, like he has done for Bryan and Celia: "We now live the BEST

LIFE we have had in ALL my life and the 19 years we've been married. God is SOOO gracious and it's time I turn this back on the devil in a BIG WAY."

While I was traveling the world in search of a big wooden boat, God had other plans. He wanted me to go on a quest deep inside the human soul, starting in my very own heart.

"For it is God's will that you should be sanctified." - 1 Thessalonians 4:3

If you long for healing in your relationship or want to help couples struggling with pornography then I hope you'll get the Conquer Series. Use it in your men's group. If you decide not to use it, return the DVDs within 14 days and you'll get your money back. There's no risk. Doing nothing is a far greater risk.

Order the Conquer Series today with coupon CHSEPT19 to receive 15% off the price of the DVDs.

ORDER THE CONQUER SERIES AT CONQUERSERIES.COM